“Having heard so much about the wonderful Whale Trail from both friends who’ve done it and from articles that I read, I jumped at the opportunity when invited by my father in law and his fellow hiking buddies,” says Jonny Mayers of Cape Town.

This hike is so popular that one needs to book a year in advance to secure your spot. It’s belongs to Cape Nature and is just outside Bredarsdorp in the DeHoop Nature and Marine Reserve on the Southern Cape coast.They allow for 12 people per trail over the 5 day hike hence there are 60 people hiking between the various campsites daily.

On a Sunday, we left Cape Town at 1pm to arrive at Potberg Base camp at 4pm. We carried our hiking ‘stuff’ into the hut where there was bunk beds, kitchen, toilet and shower facilities with the braaing area outside. As we were to discover along our hike, all the huts were very similar. As there were six of us, we met up with the other six, three elderly German couples. We aquainted ourselves with each other over the braai with the wine and beer flowing.

We all took the ‘easy’ option of ‘slek packing’ where you pay R300 and you can have your ‘stuff’ (sleeping bag, food, wine, clothing, etc) placed into your own large plastic container that gets transported from camp to camp by Cape Nature.

8pm or so was bed time to get up early the next day to start this AMAZING hike.

Brekkies (everyone sorts themselves out), then after that getting yourself ready with your ‘day pack’. In your back pack: water, lunch, camera and binoculars. We set off at 7am.

This leg of the hike is the most strenuous as it was mostly uphill. Along the way were baboons, luckily quite far distance away, gliding Cape vultures and spectacular views. As we reached the top which is the highest point of the trail, you are overwhelmed by the splendour of it all with such an array of flora specifically that of the fynbos. Apparently there are both Erica and Protea species that only grow here and no where else in the world. 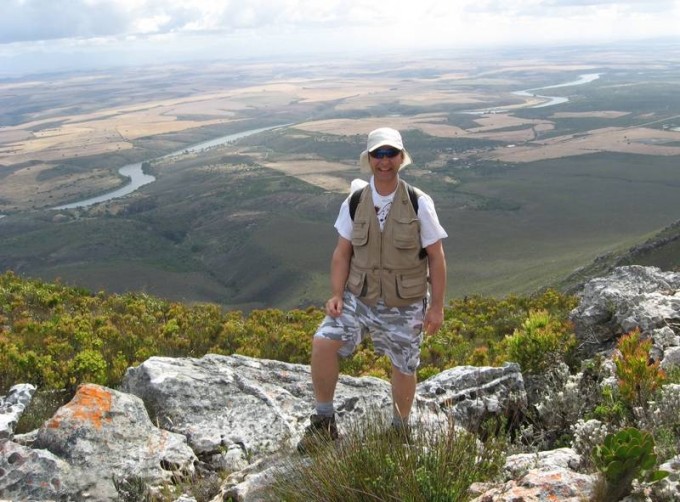 The winding Breede River below you and the Swellendam and Langeberg Mountains on the horizon, are all part of this visual feast. This day however was not without its change of weather patterns from coolish to hot, to a light drizzle, then the wind blowing, to humidity, to quite a heavy downpour and then to finally arrive about 8 hours later at our camp for the night in overcast conditions.

After a shower, cuppa hot coffee and some warm clothing, all 12 of us got to chat in the kitchen about our day whilst preparing supper.

Day 2 (the reason I say this besides it being the second day of the trip, is you actually don’t remember what day of the week it is anyway)

After the usual getting ready in the morning, we left onto what seemed like a lot of twisting and turning paths. Noticeable  every 2kms there’s a rock with the indication as to how far you’ve gone. Along the entire trail there are a few cairns of rocks stacked up against each other. This is apparently where there is the best cellphone reception. Some decided to phone home, check up on SMS’s however the main reason for this is in the event of an emergency en route, you’ll remember where the last cairn was so as to call Cape Nature to assist. Luckily we never got to ‘test’ this out.

With about a km to go you hear the sound of the sea and smell it which is distinctively different to the past two days of the fynbos smells. As we walked over the ridge with our hut there next to the sea, we were greeted by a whale and her calf quite near to us. It was almost as if it was their way of officially welcoming us to The Whale Trail.

After settling in, we went to sit under the open air gazebo between our A-frame huts and the sea. Supper was a braai.  A delicious supper with good wine, the sea just a few feet away, the amazing stars that we don’t get to see back home and the total relaxation all together after another good day’s hike. This made us all rather sleepy and so off to bed.

Well that’s what we were supposed to do, however Cape Nature and Denel (part of Armscor) had other plans. Everyone at each of the respective camps, were evacuated and picked up in bakkies to be taken back to base camp. The reason was that the German airforce was doing missile testing and the Whale Trail was in it’s flight path. For obvious security and protection reasons, we all had to be in a safe place. This apparently happens once in a while and November seems to be the best time of the year. After a rather bumpy ride which took over an hour, we got into base camp wet as there was a light downpour. Our smiles soon returned at the sight of hot coffee and brekkies awaiting us. We were briefed in a presentation by both companies and an apology of inconveniencing us all. The weather conditions got worse with heavy winds and intermittent heavy downpours. Had we been on our hike, we would’ve been soaked and quite miserable. So I guess all in all a blessing in disguise. After lunch we were back in the bakkies to our next camp.

The first two days were great, day 3 was disappointing as the rhythm of the hike was broken – bring on day 4.

About 90 % of this was walking either on beach sand or on the rocky pathway alongside it. Although it was tough, there was no rush to get to our next hut. We took it easy again taking in all the views and life we encounted – more whales, a seal, a few dung beatles (hard at work), oystercatchers with their red bills and legs and the variety of so many rock pools with their respective life forms.

After what seemed a hard day of hiking and tired legs and by this stage some blisters, none of this seemed to matter as we spotted the last hut to sleep in. It was as if Cape Nature left the best till last. WOW!!! 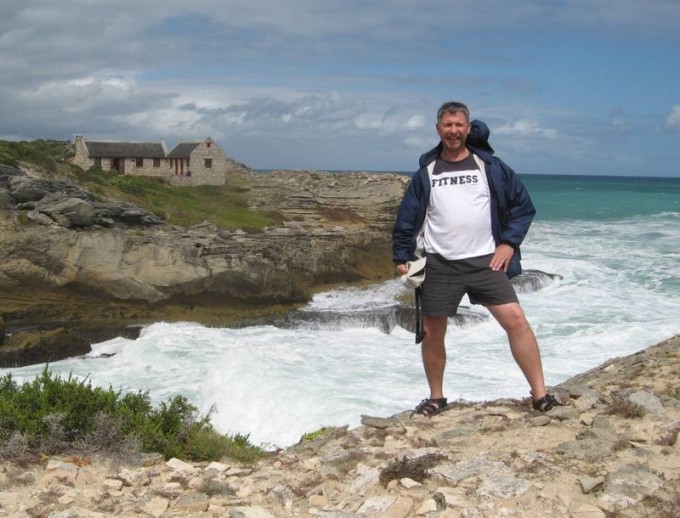 The hut had a spectacular view of a cove where the waves continually rolled in and bashed against the walls with the spray of water getting higher and higher. Although one knows it, here you could see just how powerful the sea actually is. Definitely a force to be respected.

Our last supper of the trail with the twelve of us reminincing over the past few days. We were inside the kitchen near the fireplace as it turned out to be a rather chilly evening.

The last of the food was eaten, the wine and other beverages consumed and to sleep at the end of a wonderful day.

An easy hike with some beaches, but walking mostly through the thicket. It’s one last chance to take in the scenic landscapes and simply put – the beauty of it all. Upon our arrival at the end point, there is a boardwalk where you can explore more rock pools and walk up and down the sand dunes. We called Cape Nature and within an hour we were picked up and taken back to base camp where our cars were thankfully where we had left them. Farewells all round and back into the cars to head back home.

While being a passenger, I looked at all the photos I took and smiled as I recollected all the various experiences.

God sure knew what He was doing and must’ve smiled broadly while making THE WHALE TRAIL.

Back to all Blog posts

From exploring the souks of Morocco to encountering an incredible array of wildlife on safari in Namibia or enjoying the white sand and turquoise waters of the Seychelles, Africa has something for everyone. Luckily, USA passport holders can travel to many African nations either without a visa, or in some cases can simply purchase a visa on arrival. However, the visa rules vary from country to country and can be complex.

On behalf of Itekeleng Primary School; School Management Team; SGB; Staff; Parents and Learners; First, we thank you for all your excellent organization throughout the tour. It was so smooth from day one to the last.